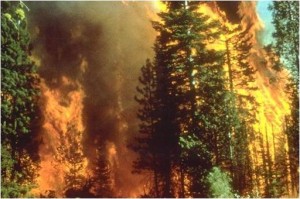 The California Spotted Owl is a long-lived and highly territorial species found in the mixed-conifer and oak woodland forests of the western Sierra Nevada and the southern coast range of California. The California Spotted Owl is considered a species of special concern in the state of California, but unlike the northern and Mexican subspecies, is not federally listed. Management of the California subspecies and its habitats is controversial because of the owl’s close association with commercially valuable forests. Also, a century of fire suppression has resulted in high densities of shade-tolerant trees that act as fuel ladders that can turn low-intensity ground burns into stand-replacing fires and eliminate large areas of owl habitat. 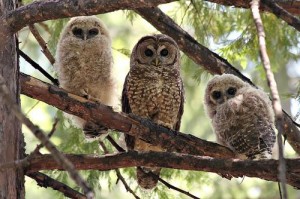 In close collaboration with Dr. R.J. Gutiérrez (University of Minnesota),our research group has been studying the demography of California Spotted Owls in central Sierra Nevadasince 1986. One of our primary goals is to monitor the status of owls in the central Sierra, as well as to try to understand the environmental factors and forest management practices that impact owl population dynamics. In conjunction with the basic demographic study, we have conducted many ecological studies of the California spotted owl regarding habitat use, life-history strategy, genetics and phylogeny, stress physiology, climactic variation, acute responses to canopy reduction, the effectiveness of spotted owl management strategies, and the effects of other owl species on spotted owl response rates during surveys. Ultimately, these results are translated into recommendations to land management agencies such as the US Forest Service responsible for maintaining viable owl populations. 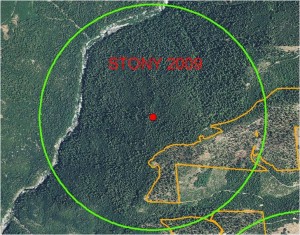 In collaboration with the University of California-Berkeley and the University of Minnesota, we initiated the Sierra Nevada Adaptive Management Project (SNAMP) in 2007, an integrated and landscape-scale experiment to test the effects of proposed forest fuel reduction treatments (SPLATs) on forest health, fire behavior, water quality and quantity, and wildlife. The owl team is particularly interested in whether the long-term benefits of reduced fire risk due to SPLAT implementation outweigh any short-term impacts on owl habitat. The orange polygon in the figure to the right represents an area within an owl territory (green circle) that was treated with a SPLAT. To assess short- versus long-term tradeoffs of SPLATS to owls, we are measuring the effects of SPLATs on owl survival, occupancy, and reproductive rates and using resultant relationships to parameterize a spatially-explicit population viability analysis that will predict how altered fire regimes might benefit owl populations.