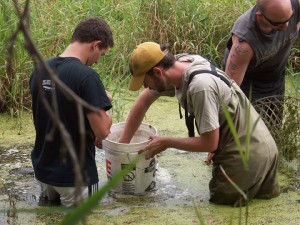 Turtles are currently one of the most threatened vertebrate groups, and many species worldwide have experienced severe declines in recent years.  These declines have been linked to a wide array of contributing factors, including habitat destruction, road mortality, increases in populations of human-associated nest predators, and direct exploitation for food and the pet trade.  As they are cold-blooded animals with temperature-dependent sex determination, turtles will likely be heavily impacted by ongoing climate change as well.  All of these factors are at play in the state of Wisconsin, which has lost approximately half of its original wetland acreage as human populations have grown over the past 150 years.  Turtles’ extreme sensitivity to environmental change makes them both worthy of research from a conservation standpoint and potential indicator species for studying the effects of this change. 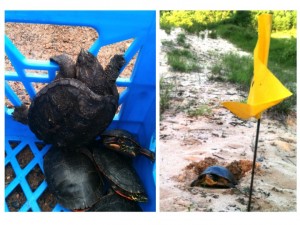 Our research group is currently investigating the effects of environmental change on three species of freshwater turtles in Wisconsin.  The globally endangered Blanding’s Turtle (Emydoidea blandingii) is a long-lived, semi-aquatic species that has declined sharply over much its historic range in the US and Canada.  The Snapping Turtle (Chelydra serpentina) and Painted Turtle (Chrysemys picta) are considered more common, although both have experienced declines as well.  All three species occur together in wetlands across the state but have exhibited varying reactions to environmental change.  We plan to explore how species-specific traits (such as life history variables and habitat preferences) have contributed to these differential responses.  By examining multiple species, we can also investigate how environmental change has affected habitat connectivity for both individual species and for the ecosystem as a whole. 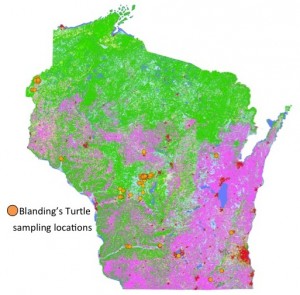 A mark-recapture program initiated by the Wisconsin Department of Natural Resources (WDNR) serves as the nucleus for this project.  For over twenty years, Blanding’s, Painted, and Snapping Turtles have been captured, marked, and released at Sandhill Wildlife Area, yielding an impressive dataset for determining long-term population dynamics in these species.  We are continuing this ongoing program and expanding it to include data from nest monitoring and genetic analysis.  These data will provide a baseline for understanding these species’ responses to environmental change as well as information on reactions to rare events (such as extreme summer heat/drought), individual reproductive success, and long-term movement and dispersal patterns.

We are also currently engaged in a large-scale effort, in partnership with the WDNR and the Nature Conservancy, to obtain DNA samples for individuals of each species from across the state.  As land usage, human population density and geological features vary
widely across the state, Wisconsin serves as an ideal natural laboratory for determining how these factors affect gene flow and population structure in each species.  Landscape genetic analyses will also be critical to managing genetic diversity in these species.  In Blanding’s Turtle, for example, our preliminary analysis shows at least three genetically distinct populations within the state.  By comparing patterns of genetic diversity across species, we hope to identify which landscape features as well as which species-specific traits are responsible for promoting (or restricting) gene flow in each species.